A downloadable game for Windows, macOS, and Linux

Roll your way through a hard-core, high-speed, fury-inducing, nail-biting, reaction-based physics-platformer where momentum and skill is the difference between making the jump and falling to your inevitable death.

The game pays homage to a time where video games were allowed to be difficult. It is best described as a crossover between Sonic the Hedgehog and Super Meat Boy - with the level design of Super Mario... and the control scheme of Angry Birds?!

The premise is simple, move the ball with your mouse. However, with 360 degrees of options, varying speeds, and moving terrain, the movement itself becomes a puzzle. Even the smallest challenge becomes difficult when you just can't seem to stand still!

Deep down in the dark deep depths of darkness, the robot uprising looms. More and more of your precious mine is slowly getting taken over by these pesky fiends. Can you change the course of destiny? Will you get to the bottom of this mystery? Will you stop the robots from conquering the world? Or will you roll past and ignore the entire story we spent countless hours writing? :(
Either way, good luck!

If you find a bug, did something awesome or have any feedback about the game at all, dont hesitate to reach out to us! We love talking about games!

Catch us on Twitter, Discord or here on Itch.

Only the steam version uses highscores, so if you want to participate - redeem the steam key you get with purchase and play the game through there!

This game started out as an idea at a game jam, that we wanted to give a shot of a full release! We released the first demo mid september 2018 here on itch.io expecting to be done within the year. It didn't quite pan out that way, the game grew and became it's own thing.

In order to download this game you must purchase it at or above the minimum price of $12.99 USD. Your purchase comes with a Steam key. You will get access to the following files:

The game is AMAZINGLY fluid and feels nice to the play. I definitely wish I could play the rest of the levels! Here's a french playthrough of the demo:

Glad you liked it, and thank you for playing. You can play the rest on the 5th of August. I enjoyed watching you play, even though I didn't really understand most of it :D. Already left a similar comment on the video.

I was looking forward to play this game; I downloaded this game on Mac OS 10.9.5 and unfortunately it crashed every time when I  got to the game menu. It would also be good if the game had more than one resolution option, I wouldn't be able to play the game properly because my dock is still visible in 1280x800.

Sorry you had that experience. We honestly haven't tested much on mac os. We know that there is some music issues, but haven't encountered any instant crashes.

About the resolution settings, I will look into it, I hope there is a solution.

Have you been able to try it on another system?

Thank you for replaying - Mac OS is the only platofrm I have, so I can't play on any other platform unfortunately. I'll wait for new updates; the game still looks like a lot of fun, keep up the good work  :)

MineRalph is a really fun, simple and very challenging game that brings back memories of Super Meat Boy and Sonic - I'd definitely recommend it to anyone looking for a platformer challenge! Also, I think it would work great on mobile devices!

I was lucky enough to get a very special version from the developers, to use in my Let's Play video - they made a secret ending for me (if I could find it), one which I didn't expect at all! xD

You can watch it yourself in the video below :)

Performance wise, the game runs very well. This game is simple, but yet its very fun and addictive.  I experience a problem where the menu screen doesn't load for me. 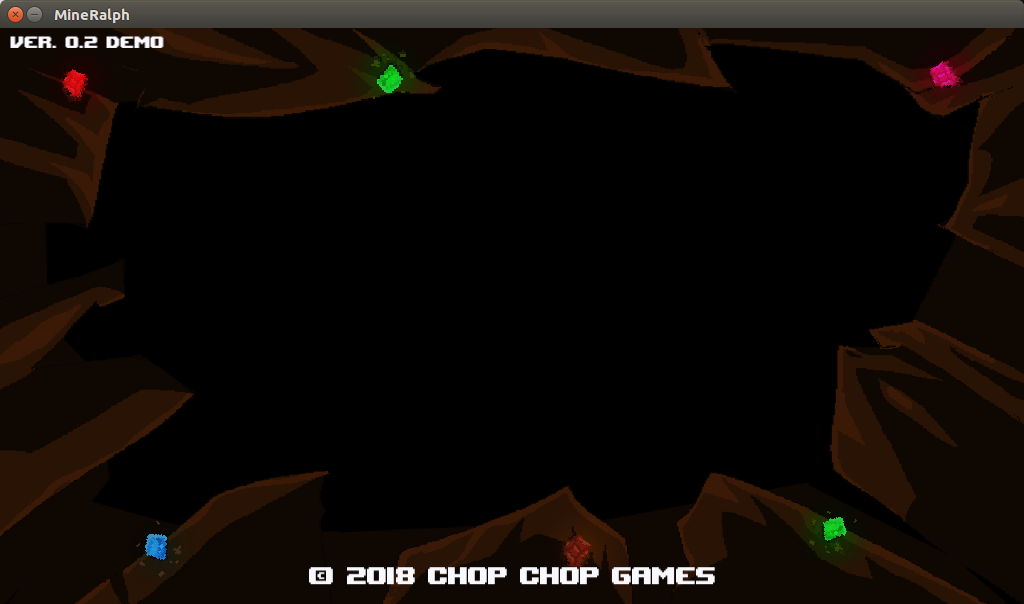 The options are still there, as you can click on them, and when clicked the transition effect plays. This bug does not affect gameplay whatsoever. 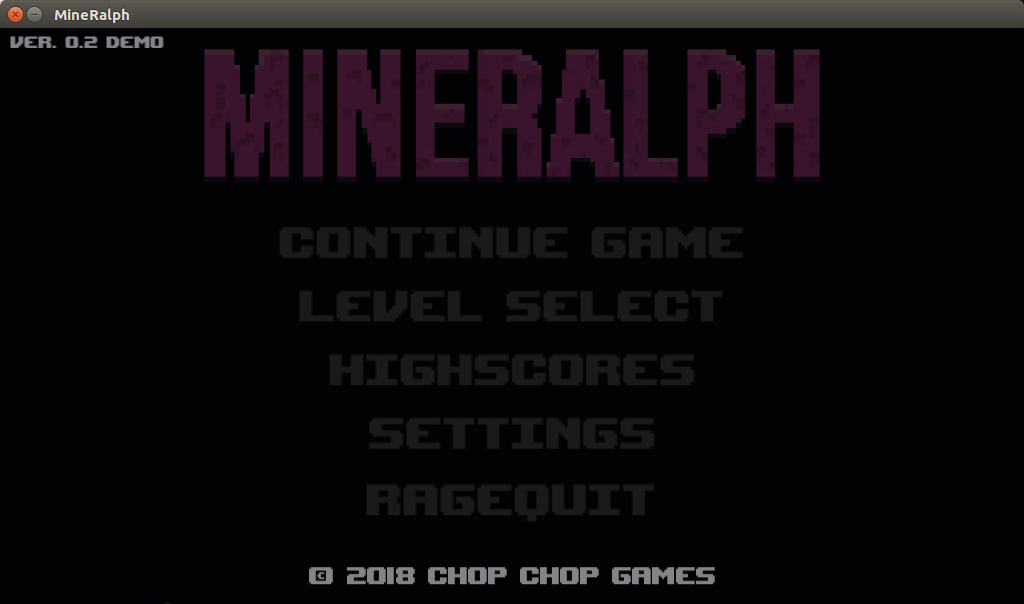 Thank you for reporting this, sadly we haven't tested much on Linux. Does this happen every time, or randomly once in a while? Glad you are enjoying it so far.

I honestly didn't think I was gonna like this game as much as I did! The controls were really tight and every failure felt like my own fault and not the game's. Great work

Thanks a lot, we really tried to hit that hard, but fair feeling. I remember that you mentioned in your video that you didn't think you would enjoy the game based the art. We are always trying to learn and improve how we communicate what the game is about, so if you have any further thoughts that would be very helpful.

Either way we really enjoyed your video, must say your mastered the mechanic exceptionally fast.

I honestly try not to judge a game based on the art. I gave 90% of the games i see a chance. I'm really glad this one worked out, I absolutely loved it. This game was well done and well worth the playtime.

Game looks cool, I'm thinking about making a video for it, but I still need to get better. I want to make a speedrunning video!

That would be cool, we would love to see more speedrunning videos to help other players with tips and tricks for how to be fast. We ourselves have considered making one to help out.

I managed to play though it, It's really fun but also hard. I love the new update though!

this game is just hard but great job making it :D

The game is sooo hard! But i still had fun :D

Awesome video, dude! I laughed so hard because this is how I play the game as well. Thanks for all the fury, now we are officially a rage game! :)

-Best regards from Bo,  the graphics artist of Mineralph!

I just cant.. THIS GAME IS TOO HARD!

Glad you enjoy it. We try to hit the fine balance of so hard that you want to beat it, rather than quit. Did you beat the demo?

I just made this account to tell you that I got recommended your game by a friend and I've already spent 3 hours playing it. I must have beat it like 10+ times already and I'm trying to reach that top3! Hope you keep making more levels!

We really appreciate you playing our 20 min. demo that much! We have more levels built already, and about 35 planned. And the levels only gets harder and more interesting. So don't worry there will be much more content in the full build.

Saw this on facebook and decided to give it a try, and i am so happy I did! The game is way too short (took me a good 20 minutes) but i cant wait to see more, Im following this and I hope you will keep making more, and even harder levels. I am practicing the controls now!

Glad you are enjoying it!

The levels only gets harder from where the demo ends, so practising the controls is a good idea. We have about 35 levels planned for the full game, with many developed already. We will post information on the devlog on this site as well as our other social media.

I've only reached level 6 so far, but it's so fun!

I noticed a bug though. The text is the "pause" menu, is in a weird font that doesnt fit in and the menu button itself looks weird in the game. But for the gameplay itself, it's really unique, I've played a lot of platformers but nothing like this!

Oh and when will the game release?

Have you been able to beat it by now? Otherwise good luck!

About the menu, we totally forgot about it, ups, thank you for pointing out, we never pause when we test!

For the release we sadly cannot tell you any date, as we are just sure to miss it (Developer life). Know that we are working on the game, and that we hope to either release it later this year or at the start of the new one. But we will be posting regular updates on our social media and on this site about the progress.

Looks awesome, but how are people able to do it that fast? I cant even get below 15 minutes????

For me it was all about strategy and clicking in the right places.

You have to follow the road when you click to move faster and just play the maps a few times. On my 3rd time run i got my time down to 7 minutes, it gets much easier when you learn the maps and where to click to keep going really fast!

Btw I absolutely love this game, it's just my time of game! ANGRY BUT IN A GOOD WAY!!!

Great that you both like it. We really try to go for the "hard game that you wanna beat" feel with MineRalph. For going fast it is all about learning the rhythm of each level, but the best thing to reduce your time is not dying.

With just a tiny bit more polish, this could be a really fantastic physics platformer! The mechanics are all already in place, but fixing a few little hangups like the quarter-pipes and the lack of any A/V cue on if your dash is recharged would go a long way in improving the feel! Still really fun though! Detailed feedback in the vid!

Great feedback at the end! The checkpoints thing is very much a balancing thing. If we place them too frequently, it wont feel as good when you reach it. The one you experienced at the puzzle is a rough one, because the puzzle could become unsolvable if you dont reset it. In terms of indication of when you can and cannot boost, we've looked into it a lot. An indicator on Ralph doesnt work that well, because he rolls around really fast most of the time and it becomes distracting, we've considered one on the mouse though. In terms of the angles, they work pretty consistently, there's minor fixes in some angles we're looking at, but it makes a HUGE difference from what angle you try to boost, once you're on a loop. If your angle is off by too much, you lose a lot of your momentum because it goes into the wall.

I hope you end up finishing it sometime though! We'll definitely address some of the issues in a future update!

Hahaha! Thanks a lot for playing and making a video! We get the absolute best feedback from people who record and talk about what happens while they play, so it was very fruitful for us! And your time was pretty good too, we estimate around 15-20mins of content the first time around that you play. Now you can go for that highscore next time ;) 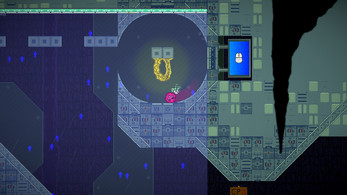 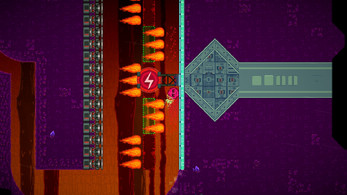 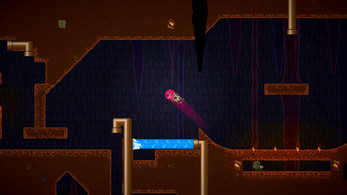 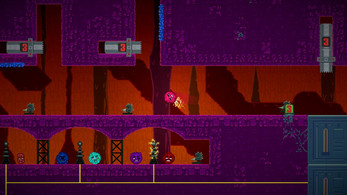